Does New Zealand have the right policies in place to manage the ever-increasing numbers of freedom campers?, asks sociology master's graduate Shannon Aston. 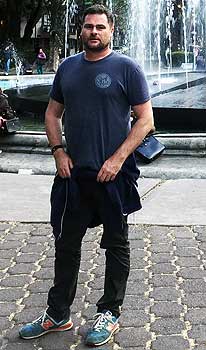 Kiwis holidaying this summer may have mixed feelings about budget-concious freedom campers who flock here from afar. New Massey research says there is growing concern among locals about the risks of “over-tourism” as well as freedom campers’ toll on the environment and the cost to ratepayers.

Sociology master’s graduate Shannon Aston says “negative perceptions of freedom camping and the contradictions of what the freedom from cost means to the local community contribute to the polarised views on freedom camping across New Zealand”.

He has explored some of the conflicts and contradictions surrounding freedom camping, with case studies on urban and rural perspectives in his Master of Arts thesis, titled The contradictions of freedom: freedom camping tensions, tourism governance and changing social relationships in the Christchurch and Selwyn districts of New Zealand.

He noted shocking news reports of New Zealanders confronting foreign freedom campers defecating outdoors that have made freedom campers “a maligned community presence” in some areas.

“Run-down campervans with counterfeit blue self-containment stickers and freedom campers defecating in city streets have become the symbols of a broken system and tourism policy that contradicts New Zealand’s image of a clean green paradise.”

His research explored freedom camping in the context of New Zealand’s longstanding cultural tradition for recreational camping, typically at low-cost coastal campgrounds in tents and caravans.

Freedom camping took off when the National-led government hastily enacted the Freedom Camping Act to accommodate the bourgeoning number of foreign tourists expected to arrive for the 2011 Rugby World Cup, Mr Aston says. “This was despite opposition concerns that existing public infrastructure, and particularly sanitation facilities, would not be able to meet the growth in demand.“

Since the act was introduced, the popularity of freedom camping, primarily among budget-conscious Europeans, has increased, with numbers leaping from 60,000 a year to 110,000 in less than a decade.

Mr Aston explores meanings of “freedom” related to current tensions – such as freedom from cost by seeking free sites and overusing public space, and freedom of mobility in budget camper vans. In collision with these is the “freedom to be in nature”, which Kiwis see as their birthright, he believes.

He interviewed owners of traditional campgrounds and council staff for his study and found many felt the Freedom Camping Act is “too permissive”. Some locals felt businesses in their city or settlement gained little in economic terms, apart from supermarkets and petrol stations. Meanwhile campers he interviewed were disappointed with a lack of facilities and infrastructure. And social media – the instantaneous “electronic word of mouth” as the primary method of information-sharing – has led to overcrowding at many global tourist locations.

Mr Aston hopes his study reveals a clearer picture of current attitudes and experiences, which led him to suggest we need more discussion about the economic and environmental impact of freedom campers. “Let’s look at the long-term picture and develop strategies and policies to fit.”

These might include more education for freedom campers, as modelled by Tourism New Zealand’s Tiaki – Care for New Zealand campaign launched mid-year. Limiting numbers, by selling a pass for a specified number of days to freedom camp, is another idea, as is having clearly designated zones where freedom campers are welcome.

And while being a patriotic guardian and protector of nature may be a worthy motivation for calling out or reporting bad behavior by freedom campers, New Zealanders should not resent young travellers for wanting to come. However, tensions could be eased, he says, with a more joined-up approach between national tourism legislation and the resources and requirements needed by local bodies and service providers for sanitation and rubbish.

Mr Aston is currently a secondary school English and Social Sciences teacher in San Diego and is hoping to work in local government policy in the future. A keen surfer, he previously lived in South Korea, teaching English, and spent time at the highly militarised 38th Parallel (the popular name for the demarcation zone between North and South Korea), photographing the surfing community for international and New Zealand news media.

Living the tourism dream sustainably
Tourism insider to development studies scholar
Can tourism save our economy?